HOW DOES IT WORK?

In its simplest form power storage works by charging a bank of batteries with either generated power or lower cost power for use when network power is at its peak rate. The battery bank can be connected to a solar generator, wind turbine or even to the network itself. Battery storage technology has been around for a while, however it has only been in recent years that it has become an affordable alternative with realistic payback periods.

HOW MUCH CAN I SAVE?

The simple math is taking the cost of power use at the peak rate and comparing it to the amount of energy stored in the battery bank at the rate it cost to produce that power (which in the case of a solar system would $0).

So if you are able to generate and store enough energy to match your household usage then you could eliminate your energy cost altogether. This is an emerging energy efficiency initiative and there is a lot of science behind the size and design of a system. We recommend you get a no obligation free quote by clicking here.

HOW MUCH DOES IT COST?

Cost will depend on the size of the battery bank, type of batteries, connection to the household and various other factors including the quality of service from the provider. A professional quote will match a system to your household requirements.

The availability of energy efficiency programs and/or incentives for appliances may vary from state to state. For the latest information we recommend requesting a quote from a professional energy efficiency company.

The development of affordable storage solutions for solar power or other renewable energy sources such as wind will change the nature of electricity generation and distribution as we know it. Most people think of wind and solar power storage (usually in the form of batteries) as a technology primarily for use in off-grid/stand-alone solar power systems. However, a growing number of companies are now offering increasingly intelligent solar power management and storage solutions–both for the residential and commercial solar power markets.

The future of electricity generation is likely to veer away from the current model of centralised power production and distribution. Renewable energy technologies such as rooftop solar, which can be connected in a decentralised, ‘distributed’ way throughout the electrical grid, have the potential to transform the way we think about and generate power, with massive potential savings in store for homes, businesses, and electricity generation/transmission infrastructure as a whole.

Traditionally, battery banks have been a technology only used primarily in solar power systems that are not connected to the electrical grid. The reason for this is fairly obvious: Off-grid homes need reliable power even at night, and solar panels are generally the most cost-effective way to generate it, but cannot provide on-demand power unless the sun is shining, which may not necessarily be when it is needed most. The solution is therefore to capture it in batteries which can then be drawn upon later to provide power.

With grid-connected solar systems (which are these days by far the more numerous type), batteries are not necessary because the electricity grid functions as a kind of bottomless battery bank. Additionally, the cost of storage technology can be prohibitively high (although this is changing), making it quite unattractive for those who have the option to simply buy relatively cheap electricity from the grid. This dynamic is changing, however, with the price of retail electricity rising across Australia, and the price of solar PV systems also dropping rapidly.

Why opt for power storage with a grid-connected solar PV system?

It is helpful to think about a battery bank for an off-grid system as equivalent to the electricity grid for a grid-connect system. Due to the the individualised nature of battery banks (as well as the comparatively small scale of their industrial production), it is not yet possible for them to achieve the economies of scale that enable grid power to reach its relative level of affordability. This is why most households and businesses with grid-connect solar power systems don’t bother to install battery banks–when it’s more affordable to simply purchase power from the grid, why would anyone bother to opt for a storage system?

Having a battery bank for a grid-connect system only makes sense if there is a way that the battery bank can be drawn on when it is advantageous for the system owner–usually during electricity peak rate periods of the day, when grid power is at its most expensive and the sun is not shining. Taking this factor into consideration creates a more complex dynamic than the traditional off-grid system, where the inverter-charger/system manager ordinarily needs only to ‘choose’ between solar power or the battery bank. In order to get the most out of a grid-connect system that also has an energy storage system (as distinguished from a simple battery bank for an off-grid system), however, the management software has to be ‘smarter’ and–ideally–programmable.

Why programmable? Incentives for solar power generation differ from state to state in Australia, encouraging different patterns of electricity consumption timing. For example, if you have a grid-connected solar system in a state with a generous Solar Feed-in Tariff such as Queensland, it will make the most financial sense for you to export as much of your solar power as possible, whereas in a state with virtually no Solar Feed-in Tariff incentive (such as NSW), it makes more financial sense to self-consume as much as your solar power as possible, because allowing it onto the grid would be something of a ‘waste’. An intelligent, programmable storage system will give you the greatest amont of control over the use of the energy that you produce and store at home or in your business, allowing you to make sure that you’re using it in the most economically advantageous way possible.

The number of solar power storage solution technologies available in Australia is limited but growing. Each one functions in a slightly different way, but the basic principle is the same: solar power can be collected in batteries for later use or to be fed into the grid, depending on the incentives. Solar power storage devices are generally comprised of a battery bank (utilising a technology such as standard-issue lead-acid or the increasingly affordable lithium-ion) and a smart inverter that can manage power in accordance with programming.

The capacity of storage devices can vary by both the brand and the model of the product in question. It may even be the case that the ‘management’ portion of the technology is sold separately to the storage portion. Conventional battery banks for off-grid systems can basically be built and expanded to meet expected demand, and are managed by inverter-chargers. This can also be true of some grid-connect storage units, but generally speaking there is no reason to put together a system that will be able to supply a home or business with electricity for 3-5+ days, as may be required with an off-grid system. Instead, the surplus storage is used as a ‘buffer’ to protect the home or business from higher electricity prices, so in most cases enough storage capacity for 10-15 hours’ worth of power, depending on how it is used. Of course larger storage systems may also be used as power back-ups for systems in locations where grid reliability is shaky, or for institutions such as hospitals who need to remain fully operational even when the grid fails.

Interestingly, grid-connect energy management/storage technologies need not necessarily even be attached to a distributed generation unit such as a solar PV system. Connection to the grid means that the grid can be used as a ‘generator’, and cheap, off-peak power can be used to charge up batteries and then consumed during peak periods when grid electricity is expensive. Where there is a Feed-in Tariff agreement in place, it would also be possible for a home or business to feed the stored electricity back into the grid and receive a premium payment for it–yet another opportunity to save money on electricity bills.

What to look for in a grid-connect solar storage system

While solar power systems are rated in kilowatts (kW), electricity storage capacity is measured in either ampere-hours (Ah, a measure commonly used in off-grid system battery banks) or kilowatt-hours (kWh, the same measure used in power bills to calculate electricity consumption as well as production). The level of storage capacity that you require will depend on how you plan to plan to use your power–simply as a back-up, or to maximise power bill savings? A useful way to look at the price of a storage unit is the price per kWh (as opposed to solar generation units, whose price is usually measured in cost per kilowatt).

The lifespan of the battery component of a solar storage/management technology is usually measured in ‘cycles’. Batteries used in storage systems are called ‘deep-cycle’ batteries, and can be routinely discharged to as low as a certain percentage of their capacity–e.g. 50% or 20% (as opposed to car batteries which need to stay closer to 100% in order to function properly). Essentially, a cycle is one round of completely discharging a fully charged battery, but in practice this is avoided as much as possible, because repeated discharges this ‘deep’ can shorten the lifespan of the battery, especially for the most common and affordable battery technology available: lead-acid batteries. The second most common type of battery commercially available is the lithium-ion battery, which can be discharged more deeply a greater number of times, but still remains significantly more expensive than lead-acid, although this is changing as technology improves, aided in great part by the global development of an electric vehicle market.

In theory, storage systems should be able to utilise any type of electricity storage device that you can think of–including fuel cells. However, fuel cells have not reached the level of reliability or affordability that the two battery technologies mentioned above have. It may only be a matter of time, however, before fuel cells are worked into an off-the-shelf power storage solution. Similarly, it may also become possible for an electric vehicle to double as a power storage device, provided the system’s power management component is capable of operating it as such. (A company called Better Place has aimed to do just this.)

How distributed grid-connect power storage could change the nature of electricity generation, distribution, and renewable energy

One of the main objections to the broad-scale uptake of renewable energy technologies is the issue of intermittency–solar technologies only produce power when the sun is shining, wind power only generates when the wind is blowing. This is in contrast to coal and gas generation (among others), which can be ramped up and down on demand. Although there have been a number of proposed fixes to the intermittency issue (such as highly detailed weather forecasting), widespread distributed storage could be a game-changing solution that few people could have seen coming even a few years ago. The idea is gaining traction internationally (below is a video of one new proposed technology that could change everything), and it may only be a matter of time before it becomes something that we all take for granted, like we all do our current generation infrastructure. 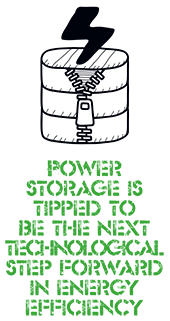